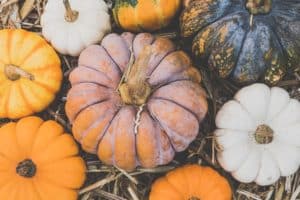 Pumpkin season is well and truly here, so we’ve been doing a little research on the history of these beloved, bright orange vegetables, and can offer you some cooking tips too.

Origins of the pumpkin

It’s thought that the pumpkin originated in North America. However, it was 19th century Ireland that created the famous carved pumpkins that we all know and love today at Halloween time.

Rather than pumpkins, it was usually turnips or mangel wurzels that were carved and used as lanterns. The scary faces were used in parts of Ireland and the Scottish Highlands.

The Festival of Samhain

The Festival of Samhaim, which took place at the end of October, otherwise known as Halloween, was thought to be a time when supernatural beings and the souls of the dead roamed the Earth.

The carved lanterns represented the spirits or supernatural beings and were used to ward off evil spirits.

Some of the origins of carved, lit pumpkins actually come from a bit closer to home in Somerset. In the 19th century, they were used for ‘Punkie Night’, which was a custom practiced on the last Thursday of October, where children marched around pumpkins and sang the Punkie song.

How to cook pumpkins

Pumpkins aren’t just for carving scary faces into, they are actually delicious and can be used to make many different dishes.

It’s best to scoop out the pumpkin’s insides and seeds/stringy parts, then cut the flesh into chunks and bake, roast or boil. You can then use it to make soups, stews, mash, curry, risotto – the possibilities are endless.

You can also plant the seeds in pots to enjoy your own home-grown pumpkins next year too!

Good news – chocolate is good for you!
Live music from Andy Doran