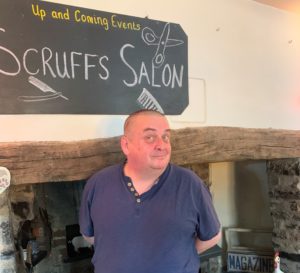 Our Paul braved the shave recently (May 17, 2020) in order to raise much-needed funds for the charity Churches Housing Action Team (CHAT).

Going live on Facebook, he handed over the razor to Donna, who was more than happy to oblige. He raised a fantastic £1,100 for the charity.

CHAT has been working since 1995 to tackle homelessness. It helps people avoid evictions and brings hope to the communities of mid-Devon. All of its services are provided free of charge by a dedicated team of trained staff, supported by knowledgeable volunteers.

It believes everyone is entitled to decent, secure and affordable housing.

Mark Bailey, Development Manager at CHAT, said: “It’s fabulous that Paul took on this personal challenge and involved his whole community. He has both raised funds and awareness of the current plight of people who may become homeless, as people may get into debt, as some employers may not be able to retain all their staff, people may lose jobs, and depending on decisions made by the government, people can come to CHAT for support.

“Our current demand for both advice and food is continually rising and we thank Paul for his tremendous fundraiser.”