The history of the burger 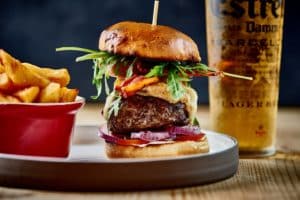 We love a good burger here and they regularly feature on our menu, so we were thrilled when we recently found out that National Burger Day takes place on August 26.

To celebrate, we thought we’d bring you the history of the burger!

Origins of the burger

There are many tales of where the burger originated. Many claim it was invented by Charlie Nagreen in Wisconsin in 1885 when he sold a meatball between two slices of bread at a fair in Seymour. However, in Athens, Texas, it was Fletcher Davis who had the title of the hamburger creator bestowed upon him in the 1880s. There are many other origin stories floating across America, but unfortunately lack documentation.

During the first-century A.D, a Roman cookbook included a recipe for a minced meat patty blended with crushed nuts and spices before being cooked. A ‘hamburgh sausages’ recipe also appeared in a mid-1700s cookbook and a meat patty on bread called a Rundstück Warm was popular in Germany in 1869.

A precursor to the burger we know and love today, was an inexpensive dish called a ‘hamburger steak’, which appeared on American menus in the early 1870s.

These minced beef and onion patties served on a plate took their name from the cows raised in the countryside around Hamburg, where the beef supposedly came from.

By the 1880s hamburger steaks were available at restaurants across the US.

The development of burger buns

Hamburger steaks were often served in locations that also sold bread and sandwiches so the burger buns that we know, and love today developed naturally here.

In 1887 a New York lodging house advertised ‘a bowl of coffee, hamburger steak and bread’. In 1891, the Boston Glove advertised a cookbook with a recipe for ‘hamburger on toast’.

The humble burger is now a global phenomenon, thanks in part to famous franchises honing and developing the recipes and taking them to the far corners of the globe.

It is thought the burger first arrived here in the UK in 1954 with the opening of the Wimpy chain of restaurants, 20 years before McDonald’s began operating here.

We have always prided ourselves on our homemade burgers, whether it’s beef and chilli, lamb & coriander or chicken & guacamole, a new one is always in production. To see what the latest burger on our menu is, click here.

To celebrate National Burger Day, why not book a table and join us for one?

A guide to tasting gin
In season – tomatoes